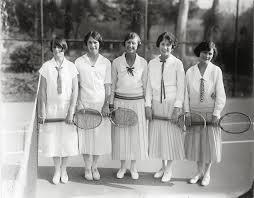 We're still at the cutting edge of club tennis after more than 100 years and here are some of our key milestones:

“Juveniles” admitted as members for the first time and for summer holidays only.

1952
Clement Attlee (Leader of the Opposition) and wife joined as members.

1983
First week-end visit to GMLTC by members of Enschede LTC of The Netherlands, with a reciprocal visit the following year. These highly social annual exchanges ran for 15 years.

1985
Five acres of land between the club and the Chiltern railway line purchased.

1986
Club members collaborate to rebuild the clubhouse on its old site, giving the club its first bar.

1995
Further purchase of land towards railway.

2003
Three all-weather courts constructed on land towards the railway.

2014
A four-year sponsorship agreement with Hamptons International is confirmed

Added artificial clay surface to one of old tarmac courts and added floodlights to give us 4 artifical clay and 4 floodlit courts. Improved pathways around the club grounds.

Refurbished the top clubhouse,  re-built Court 14 and added a 5th artificial clay surface.  Added floodlights to one of the hard courts to give us 6 floodlit courts. Re-vamped the 4 grass courts in the spring - in the "best condition for many years".

Re-surfaced our two tarmac courts at the top of the club to acrylic hard court.

Resurfaced the old hard court that had floodlights added the previous year.  3 of the 6 floodlit courts are now floodlit.   Membership reached 575 from 375 in May 2015.

Club shut from March to mid May due to coronavirus pandemic. Moved membership season to 1st June to 31st May when we reopened.  Membership increased rapidly in May and June to 535 following the membrship renewal period. Agreed contract to resurface the block of 3 tarmac courts to artificial clay with due to complete by end of October 2020.

Come and join us!

Contact us today if you are interested in joining one of the few 'Grand Slam' tennis clubs in the UK.

Details of Data Controller are